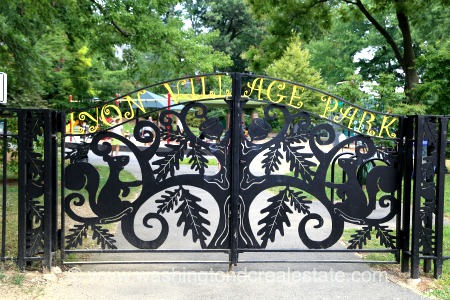 Lyon Village is a friendly, walkable community in Arlington, Virginia, located just one block north of Clarendon and all of its urban conveniences.  The community oozes small town charm with its tree-lined streets, network of parks and green spaces as well as ongoing community events such as an Easter egg hunt and annual Fourth of July parade.  Voted “Best Neighborhood” in the 2013 “Best of Arlington” reader survey, Lyon Village initially was developed as an early 20th century commuter suburb and today continues to take advantage of its close proximity to the Orange Line Metro corridor.

The housing stock comprises largely single family homes built anywhere from the 1880s to the 1990s, including a mix of architectural styles ranging from Colonial Revival to Tudors, Spanish Mission, and Queen Anne.

Lyon Village is located north of the Clarendon Commercial District and nestled between Lee Highway to the north and Wilson Boulevard to the south.  The community is served by the Clarendon Metro Station.