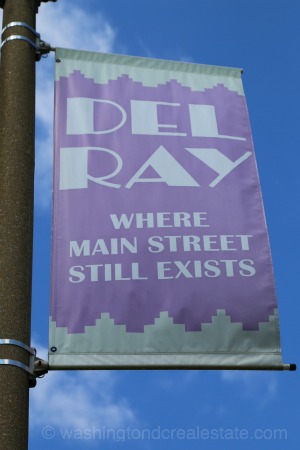 Del Ray is an artsy community in Alexandria, Virginia, that's popular with young families.  Originally founded in the 19th century, the light rail that connected it to Washington helped establish Del Ray early on as ideal for commuters.  Today Del Ray combines a Norman Rockwell atmosphere with a coffee shop vibe, celebrating its white picket fences and busy main thoroughfare.   Mount Vernon Avenue in Del Ray is perfect for a stroll, dotted with eateries, small mom and pop businesses as well as more sophisticated specialty food shops and restaurants.  On the first Thursday of every month, Del Ray hosts "First Thursday," with a street festival celebrating a particular culture or seasonal event.

Houses in Del Ray are largely single-family homes and comprise an eclectic mix of Cape Cods, Colonials, Bungalows and even some Victorians.  Yards are small by suburban expectations but hold their own against urban standards.  A select few homes started out as Sears kits back in the early part of the 20th century while a number of homes were originally built to house workers who labored on the Potomac Yard railway just east of the community.  While some houses have undergone renovation, Del Ray has largely escaped the "tear-down and mcmansion cycle" present in other affluent communities.  A smattering of town homes provide additional affordable options.

Close to the George Washington Parkway and to 395, commuters can get to DC by car in approximately ten minutes.  The Braddock Road Metro Station located on the Blue and Yellow Lines is the nearest Metro Station while the neighborhood is also served by the DASH bus system. Del Ray is bounded by Braddock Road to the south; Russell Road to the west; Jefferson Davis Highway and Leslie, Glendale, and Mount Vernon avenues to the east; and West and East Glebe Road to the north.

This may be interesting for you!