You Can Live With Bao Bao in Woodley Park 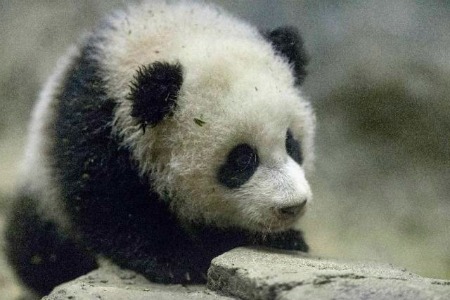 All eyes were on 18-month-old Bao Bao this past February when she started the weaning process away from her mother, Mei Xiang. For those of you who don't follow the exploits of Bao Bao and the other very rare, giant pandas living in the National Zoo in Washington, DC, Bao Bao is a Panda cub making the transition to living "separately" from her mother. By all reports, Bao Bao is doing well with the separation process, eating bamboo and solid foods. While she is living "apart" from her mother in another house, Bao Bao's parents are both nearby in the David M. Rubenstein Family Giant Panda Habitat and Bao Bao will continue to see them on a regular basis.

Of course Bao Bao is something of a celebrity. Born March 23, 2013, to much acclaim, Bao Bao (Chinese for "Treasure") is the result of artificial insemination of Mei Xiang, and is one of only several hundred giant pandas alive today in captivity. Bao Bao made her public debut in January 2014 and instantly captured the hearts of the public. Both Michelle Obama and Peng Liyuan, the First Lady of China, sent her welcoming videos in tribute. Bao Bao recognizes her name when called by familiar voices and stands on her hind legs upon request from the zookeepers. On August 23, 2014, Bao Bao celebrated her first birthday at the zoo with crowds of her adoring fans in attendance. In accord with the birthday girl's wishes, the giant birthday cake boasted frozen fruits (Bao Bao loves frozen "fruitsicles") and was largely concocted out of vegetables, including sweet potatoes.

This January the Paparazzi caught Bao Bao frolicking in the snow -- her first experience with the snowy white stuff, although probably not her last, given the weather in DC these last winters. Despite being one of the biggest draws at the National Zoo, Bao Bao will eventually be sent to China when she is four years old as part of a Panda Diplomacy Program with China.

Until then Bao Bao's exploits are available on the Panda Cam and live, in person at the Giant Panda Habitat at the National Zoo in Woodley Park. The Panda Habitat is open from 10 a.m. to 4:30 p.m. on a daily basis. If crowds are heavy, the line may close as early as 4 p.m.

The National Zoo is located in the northwest quadrant of Washington, DC in the Woodley Park neighborhood just steps from the Woodley Park Zoo/Adams Morgan Metro Station on the Red Line. In addition to being home to the National Zoo, Woodley Park is within walking distance of Adams Morgan, Cleveland Park and Rock Creek Park. A quiet, leafy community, Woodley Park features a mix of row houses, Cape Cods and split level homes set back from the road on tree-lined streets. The neighborhood is one of the few DC communities that actually boast private lawns as well as easy access to the many nearby parks and playgrounds. The top-rated public and private schools make it a favorite of many families. Woodley Park is bounded by Rock Creek Park to the east, Calvert Street to the south, Cleveland Avenue to the west, and Woodley Road to the north. Adjacent neighborhoods include Mount Pleasant, Adams Morgan, Cleveland Park, Kalorama, and Massachusetts Heights.