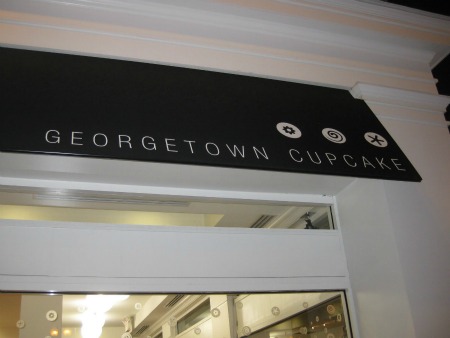 Cupcakes -- that small, freshly baked treat -- have made a comeback -- and Washington, DC is no exception.  The places listed below have all inspired long lines of devoted fans committed to their favorite dessert.

A Georgetown favorite,  Baked & Wired is known for its signature "chocolate cupcake of doom."   They also sell the "Flapjack," which features maple brown butter cake and caramel buttercream frosting.  In a delicious twist, Baked & Wired also uses candied bacon bits on top of some of the cupcakes, along with fresh blueberries and other enticing ingredients.

The shop is located at 1052 Thomas Jefferson Street NW.

Georgetown Cupcake is perhaps the best known of the confection shops, with a popular show on the TLC Network, as well as a number of creative cupcake choices.  Two sisters own the bakery as well as additional shops in other locations. Cupcakes uniquely combine frosting and batter, offering seasonal specials such as the Hummingbird, Irish Crème, Pumpkin Spice and Lemon Blossom. Classics such as vanilla, red velvet and chocolate, are staples.

With five locations in Washington DC as well as other areas of the country, this bakery features 50 different flavors with new ones constantly in development. You can choose your ideal cupcake size from 1-6" in a variety of flavors.

Recognized as the first cupcake bakery in the world, this shop opened in DC in 2005 and has largely been credited with starting the cupcake craze as we know it today.   Sprinkles relies on the use of fresh ingredients and spices in all of their confections.  A favorite of celebrities such as Ryan Seacrest, Oprah, and Blake Lively, specialties include pumpkin, vanilla, and ginger lemon.  Sprinkles even prepares special cupcakes designed specifically for pampered dogs.