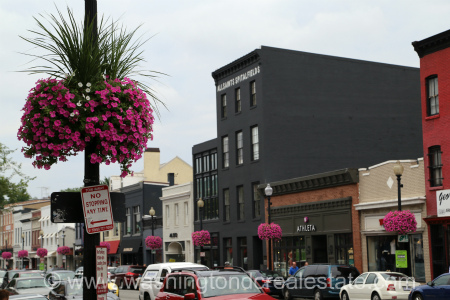 From cozy boutiques to couture shopping, Washington, DC, is thriving as a shopping mecca because of the area's high income and constant influx of business and tourism.  The following are some of the top neighborhoods for shopping or just browsing.

Long the city's main shopping district, most of the stores are found along Wisconsin Avenue and M Street, NW.    Home to chain stores as well as one-of-kind boutiques, Georgetown is known for shoes, designer wares, as well as a mix of chic and thrift shops.  Parking can be tough and the sidewalks and streets are typically crowded.

The Eastern Market is one of the best farmers' markets in the area with fresh produce, baked goods, fish, meat, cheese, and dairy items. Saturdays, the market transforms into an arts and crafts center while Sundays Market becomes a flea market.

For more upscale shopping, stop at Union Station.  Union Station does triple duty as a railroad station, historic landmark, and shopping mall with more than 130 stores, including many clothing, specialty and souvenir shops.  Union Station also boasts a nine-screen movie theater and more than 40 restaurants.

Dupont Circle is less crowded than other areas and true to its DC roots, offers many traditional shops, such as Talbots, Gap and Brooks Brothers.  Dupont Circle is also home to a quaint mix of antique shops, old book stores and eclectic boutiques such as The Proper Topper and Betsy Fisher.