The Right Place in DC for a Better Burger 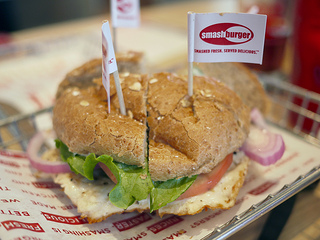 One of the nation's fastest growing and most popular burger joints is ready to expand in Washington D.C. Smashburger's newest location recently opened in Bethesda, Maryland, with plenty of juicy patties ready to be devoured by burger aficionados. This is the sixth location of a dozen planned Smashburgers throughout the Washington DC and Northern Virginia area.

While Smashburger is known for their "smash to order" burgers, they also serve chicken sandwiches, signature sides, salads and creamy Haagen-Dazs shakes they spin by hand. The chain is growing rapidly with more than 200 restaurants in 29 states and four countries.  Washington DC is one of the newer markets for Smashburger with the plan to open about 30 locations throughout the DC area over the next few years. Current locations include:

The chain was started in 2007 by Rick Schaden and was recognized in Gourmet Magazine as one of the Top 25 Food Entrepreneurs of the Last Quarter Century. Rick was the creator of the McDonald's McGriddles and the Stuffed Crust Pizza from Pizza Hut before opening his own restaurant.  Smashburger was also recently rated one of the top Fast Casuals of 2012 and named as American's Most Promising Company by Forbes Magazine.