Now You Can Live in a Tony Suburb in the City: Cleveland Park 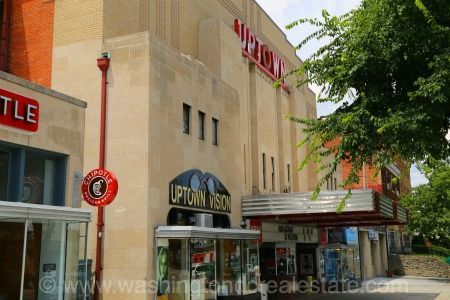 Cleveland Park is perhaps best known as the site of the National Zoo and the Uptown Theater as well as its "grand dame" apartments on Connecticut Avenue.  Increasingly, this self-contained tony suburb in the city is also a sought after neighborhood for families and young professionals.

The neighborhood started off as a "summer community" for well-heeled DC residents in the days before air conditioning with its hilly location providing relief from the hot, humid air in the then built-up areas of the District.  The community draws its name from President Grover Cleveland who purchased a stone farmhouse for use as a summer estate in the late 1880s at the time when many of the subdivisions were forming.  Many of the homes built during this period endure today with wide porches, oversize windows and overhanging eaves designed to maximize the breeze.   The evolution of the neighborhood progressed in fits and starts because of the Great Depression and bankruptcy of an initial development company, explaining why so many different style homes are frequently observed next to each other.  Single-family homes ranging from bungalows, colonial revivals, and massive tudors line the streets running between Connecticut and Wisconsin Avenues.  In contrast, iconic apartment, condo, and co-op buildings, built largely in the 1940s and 60s, dot the exterior of Connecticut and Wisconsin Avenues.

Cleveland Park is one of the few neighborhoods in the District that boasts homes with moderately-sized yards.  Indeed, for families Cleveland Park provides the best of both worlds -- decent-size yards as well as access to a number of public green spaces such as the Tregaron Conservancy as well as great playgrounds such as the Macomb Street space.  Despite the suburban feel, Cleveland Park is still a short metro ride from Downtown.  The community is also surrounded by good public and private schools including Oyster Bilingual and John Eaton Elementary (public) as well as Washington International, Maret, and the Sidwell Friends School (private).  Many of these single-family  homes come with a price, however -- turnover is also fairly low which tends to boost value.   Condos and co-ops are more readily available but the lack of row houses in the community limits the supply of the more cost-efficient basement apartments in other communities.

In the last five years, Cleveland Park has seen a number of new eateries and homegrown shops move into town.  Always a walkable city, Cleveland Park is now drawing traffic from outside the neighborhood with its revamped commercial district.  The Ripple wine bar and its sister shop Sugar Magnolia have quickly morphed into top-ranked favorites.  Ripple's small plates make adventurous use of foams, purees and sauces for added flavor alongside its distinctive wine and cocktail menu.  Sugar Magnolia satisfies the most discerning sweet tooth with a tiny market of prepackaged ice cream sandwiches and hand-scooped ice cream as well as made-from-scratch signature desserts.

Cleveland Park is almost in the exact center of northwest DC and boasts its own Metro Station on the red line.  Straddling Connecticut Avenue, Cleveland Parks is bounded by Rock Creek Park to the east; Tilden and Upton Streets to the north; 37th Street, Wisconsin Avenue, and 34th Street to the west; and Woodley Road and the southern border of the Washington International School to the south.  Cleveland Park is adjacent to the Woodley Park and Cathedral Heights neighborhoods.