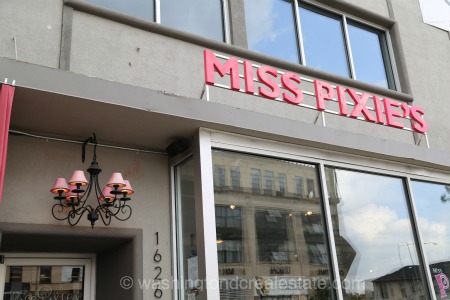 It’s hard to believe that less than 20 years ago, Logan Circle was an area you went out of your way to avoid – crime-ridden and home to druggies and other unsavory individuals.  Fast forward to today where Logan Circle is one of DC’s “IT” neighborhoods – a coveted address for only the hippest of the City’s elite.

Southern Logan Circle is officially the densest tract in the District with the largest number of persons per square mile as of a recent census.  And, while in this day and age, many survey respondents yawn at the question, Borderstan readers anointed Logan Circle as the “Gay Neighborhood” – displacing Dupont Circle over the last ten years. Regardless, the funky vibe of the many restaurants and shops lining the circle attract a mix of residents and visitors with eclectic design as well as first rate food.

The majority of the action is concentrated on 14th and P – approximately one block away from the Circle itself at the intersection of Vermont and Rhode Island.  The Birch Barley is a favorite stop with its more than 500 beers and rock club vibe.   Enjoy a succulent brunch at the Helix Lounge or put the perfect finish on a romantic evening in the Circle with an aphrodisiac at the Pearl Oyster Palace followed by a dip in the rooftop pool at the Donovan House Hotel. Shopping provides another diversion.  The cozy Transformer Gallery provides an outlet for some of the more happening artists to broadcast their perspective on current events.  Timothy Paul Carpets and Textiles is awash in color with contemporary handmade rugs, pillows and other tapestries from Afghanistan, Morocco, and Turkey – all showcased in a gallery-like setting.

And to decorate your renovated Victorian row house, residents know to shop at Showroom 1412 and Miss Pixie’s for timeless and distinctive furniture and appointments.  The late 19th century Victorian row houses are a hallmark of the area as Logan Circle is the last remaining all-residential circle in the District.

The bronze statue in the circle – all 12 feet – commemorates Civil War General, John A. Logan.  Logan also served the state of Illinois as a senator before the war.  In a trivia aside, Logan was the force behind getting recognition for Memorial Day as an official holiday.  While Logan was never a hipster, his stately countenance complements the throngs of visitors and residents who enjoy the energy and new-found vibrancy of DC’s “IT” neighborhood.