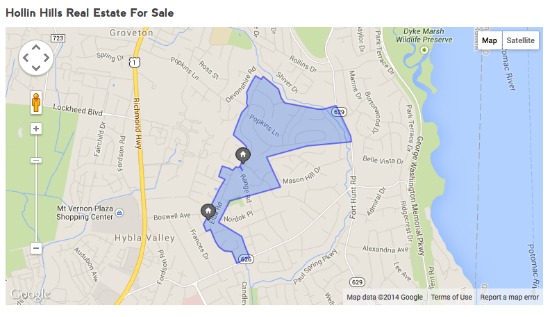 In a region where center-hall Colonials and period homes dominate, Hollin Hills in Alexandria offers a vastly different aesthetic and history, contributing to its emergence as one of the hottest neighborhoods in the Metro DC area.  Hollin Hills was the vision of Robert C. Davenport, a successful builder in the post-WW II decade.  Construction in Hollin Hills begin in 1948 and continued on through 1970.  Davenport hired Charles Goodman as the architect, instructing him to specifically design the homes around the winding creeks, steep slopes and densely wooded area that made up the proposed building site.  Davenport set aside land for hiking trails and parkland, determined that the new neighborhood would not interfere with the curves of the land.  With his experience in military construction, Goodman was exceptionally skilled in maximizing space and privacy with the result that the first home models were varied in size, plan, and elevation based on the terrain.

One of the most popular models was a split-level home, which proved particularly well-suited for the sloping sites that made up so much of the area.  Goodman focused his designs on privacy, solar orientation and vistas but never with a view into a neighbor's window or yard.  Carports were included with some models but never garages.  A later building plan allowed for a two-story home with a second floor projecting over traditionally unusable sloping land.  Davenport and company were ahead of their time in using salvaged brick  and other reclaimed materials as accents for many of the exterior and interior walls and fireplaces.

Today some 400 glass art forms endure as a testament to the open interior spaces and the large window areas that characterize Hollins Hills homes.  While many owners over the past 60 years have renovated or expanded the relatively small homes, residents agree that for the most part, the upgrades have been tasteful and in keeping with the original vision.  Times have certainly changed since 1951 when Life Magazine recognized the neighborhood for having some of the best houses in the country for under $15,000.    Today, relatively untouched homes sell for in the hundreds of thousands of dollars while subtle renovations such as an enlarged kitchen or extra bath only add to the price tag.

As prospective DC homebuyers continue to demand that rare combination of convenience, aesthetic, and price, the winding treescape that is Hollin Hills is becoming the darling of the real estate market.