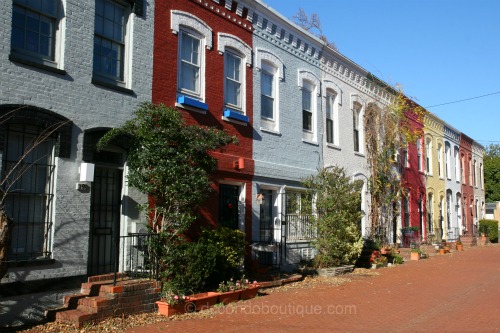 Hidden away behind larger neighborhoods, DC's alleys were once thought of as dark and dirty places ripe for bad behavior. This perception is rapidly changing as developers and the District's Office of Planning re-imagine these historic side streets as community play spaces and even potential sites for mixed housing. Despite their stereotype, alleys offer a number of appealing characteristics:

Alleys first appeared in DC after the Civil War when freed slaves came to the city looking for cheap homes in which to make their lives. In response to the surge in population, developers created both street-facing residences and alley dwellings which were originally intended as everything from back entrances to affluent homes to stables, carriage houses, artist studios as well as both commercial and private garages. Many of the dwellings built were cramped with no indoor plumbing and certainly not ideal for families. In 1892, legislation banned building dwellings in alleys less than 30 feet wide and by the 1920s and 30s, many alleys had fallen into disrepair, ceding ownership to drug dealers, gangs, and ladies of the evening. First Lady, Eleanor Roosevelt, even got involved, pushing Congress to ban alley homes and attempting to force all residents out by 1944.

These zoning rules, which have changed little since the late 1800s, have limited the potential growth of alleys. Today, alley residences must be on lots that are at least 30 feet wide and 400 square feet or larger. The original rationale was to ensure that a firetruck could get through but in 2015 modern firetrucks are smaller and even trash collection and management are conducted in more innovative ways. A proposed amendment to the code would remove the 30-foot wide rule. A report released in 2014 counts 1,240 remaining alley buildings west of Anacostia with recommendations that the alleys be repurposed for playgrounds, fairs, and other community activities.

The Georgetown neighborhood was one of the few communities where alleys actually flourished: Cady's Alley, a collection of 19th century stables, warehouses and dilapidated dwellings, has been converted into a high-end shopping district filled with designer wares. Because real estate is so valuable there, houses on small streets in Georgetown are valued $500K and above, with Georgetown residents taking great pride in these compact environments.

Blagden Alley near Ninth and L Streets, NW, is another historic area that has been officially recognized for its intact alley network and collection of historic buildings. The alley is currently home to several restaurants, a gourmet coffee shop and fitness studio. A developer is looking to build 140 micro units targeted to high-income professionals. In other communities ranging from Petworth to local pockets on Capitol Hill, residents took it upon themselves to fix up their local alley and turn it into a community asset. The alley near A Street and Seventh Street, SE is a popular spot for reading, gardening, or playing a quick game of cornhole.

As the District looks at rewriting its zoning code, the possibility that alleys could be transformed into new housing areas helps bring the promise of home ownership within the reach of working families.