Here's Why DC is Good for Women 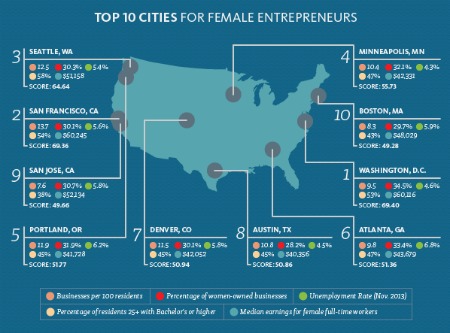 According to a 2014 study by NerdWallet, a personal finance Web site, Washington, DC, has the highest rate of women-owned businesses in the nation. NerdWallet ranked the best cities for women entrepreneurs by looking at a number of different factors, including earnings of female entrepreneurs, economic state, and overall business friendliness of a city. The number of women-owned business firms in the US overall grew 59% between 1997 and 2013 with female entrepreneurs generating more than $1.3 trillion in revenues from approximately 9 million U.S. businesses. In the nation's capital more than a third of the businesses are owned by women. This stat is not surprising, given the high education levels of women there as well as the presence of several business resources, including the Washington DC Women's Business Center.

More Than One in Three Tech Jobs Are Held By Women

DC is also the site of a small (in comparison to the West Coast), growing start-up presence, spawned by start-up LivingSocial, located near Gallery Place in Penn Quarter. A parallel study by financial developer SmartAsset, notes that more than one in three tech jobs in DC are held by women. Using 2013 US Census data, SmartAsset ranked DC as number one for women with "computer jobs" followed by Kansas City, Missouri; Fremont, California; Houston, Texas; and New York.  Economists note that the physical presence of the Federal Government in Washington, DC, and emphasis on enforcing Equal Employment Opportunity Laws, may account for the results. Despite the fact that San Francisco, the Valley and Boston are considered "tech hotbeds," they didn't rank in the top five cities although San Jose posted the highest median female income with $72,265. Alas, despite these gains, DC women still make 7.7 percent less than men in similar tech jobs -- perhaps validating actress Patricia Arquette's recent lament on equal pay in her much talked-about Oscars speech.