Expansion Coming to the Dinosaur Hall at the Natural History Museum 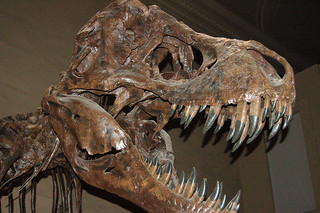 A new dinosaur hall will soon be a part of the Natural History Museum in Washington D.C. Called the "Wankel T.rex,"  the hall provides a look at some very rare fossils. The museum recently reached a 50-year agreement with the U.S. Army Corps of Engineers to transfer a Tyrannosaurus rex skeleton, which will be displayed in the new hall of the museum.

This skeleton was discovered by Kathy Wankel in 1988. Kathy is a rancher from Angela, Montana,who was working on federal land close to the Fort Peck Reservoir when she discovered the fossils. Originally, the skeleton was loaned to the Museum of the Rockies in Bozeman, Montana, for 21 years.

This massive T rex skeleton will make its way to Washington D.C. in the middle of April and will become the main attraction for the new 31,000-square-foot hall which will open to the public in 2019.

The T. rex skeleton won't be the only exhibit showcased in the new hall. The Natural History Museum will add many other exhibits, including more than 46 million fossils.

Since the Natural History Museum is one of the more popular family attractions, it's recommended that you show up early in the morning or later in the afternoon. IMAX tickets should be purchased in advance and visitors should expect to spend 3-4 hours at the museum.

The museum is open from 10am to 5:30pm most days and offers extended summer hours.