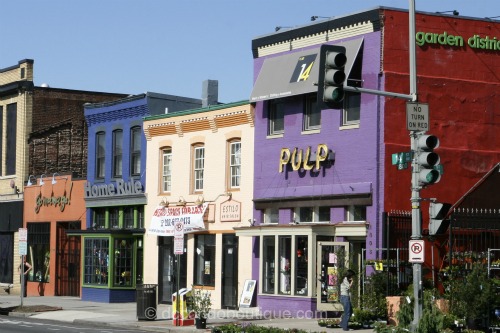 Powerful yes, but sexy? According to a recent Thrillist ranking, the 14th Street neighborhood in Washington, DC, ranked #9 in the "Top Ten Sexy Neighborhoods," in the U.S., edging out Back Bay in Boston at #10. Not surprisingly, South Beach Miami came in first but how could it lose when the first sentence of its listing reads, "sex permeates the air when you roll across the MacArthur Causeway into South Beach…" ?

14th Street is the New "IT" Neighborhood

So how does power and the DC area's high concentration of brainpower translate into sexy? DC has always been a hotbed for young professionals.   With the growth of entry-level jobs in the government sector because of the roaring DC economy, the migration of young people has ramped up in the last five or six years. 14th Street is the recipient of much of this activity where some $3 billion worth of investments has resulted in revitalization of the area's row houses and the opening of new restaurants and bars. The area of 14th Street from Rhode Island to Florida Avenue has been undergoing revitalization for years with additional new money coming in, starting in 2010. 14th Street bridges Logan Circle and U Street, two of the area's hottest neighborhoods, especially for Millennials. Both Logan Circle and U Street suffered after the assassination of Martin Luther King, Jr., in 1968 with the ensuing riots and suburban flight.

From Whole Foods to Luxury Condos

Neighborhood business owners trace the turnaround with the arrival of Whole Foods in P Street in 2000, followed by a number of other upscale businesses, convinced that the Whole Foods success was validation they could thrive in the community. Much of the latest development is now focusing on the opening of new luxury condos catering to the tight rental housing market. Louis at 14th and U Street is one of the newer buildings, offering studio, one, and two-bedroom residences in an amenity-rich environment.

Despite the projected 1,200 additional housing units and more than 85,000 sf of retail space underway, DC's "hip strip" still has a long way to go to compete with South Beach for the #1 spot. In fact, according to Miami's listing, "models are literally standing in front of you at the grocery store with topless girls laying out on the beach and bars open until 5 am."