Connecting the Community with the Anacostia Riverwalk Trail 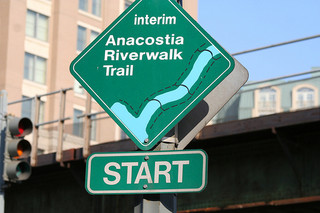 The Anacostia Riverwalk Trail connects residents, visitors and communities to the Anacostia Waterfront, providing a more convenient and scenic means of travel for walkers and cyclists.  Once complete, destinations such as the Fish Market, RFK Stadium, the National Arboretum and all of the communities found between the Bladensburg Marina Park and the National Mall become more easily accessible.  To date, 15 of the planned 28 miles of the Trail are open and in use by pedestrians on a daily basis.

The sixteen waterfront neighborhoods connected by the trail include:

The second, or eastern, of the two fiberglass bridges over railroad tracks opened in May 2013, completing trail connections on both sides of the river from South Capitol Street to Benning Road.
The Western part of the trail and the Maine Avenue portion both opened in 2012, while the eastern fiberglass bridge opened in 2013. The Kenilworth Aquatic Gardens segment is next in line and currently is under construction. Many other segments are close with the estimated final date of completion by late 2015.

The project is part of the President's America's Great Outdoors initiative focussed on reconnecting Americans with the outdoors.