Cameron Station in Alexandria Offers the Feel of a Gated Community 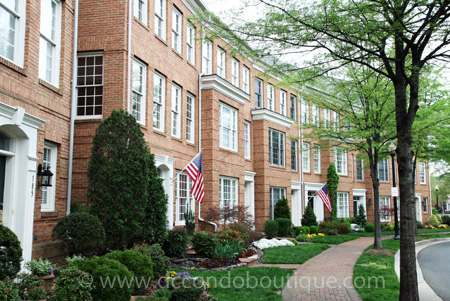 Cameron Station, located in the West End of Alexandria, Virginia, is NOT a gated community but residents who live there point to the sense of community and many amenities as giving the neighborhood a "gated feel." A Main-street boulevard (part of Brenman Park Drive) further adds to the close-knit community spirit with rows of condominium apartments topping storefronts that include a spa, coffee shop, drycleaner, and corner market, among others. Residents range from young professionals with no children to growing families with two or three kids under the age of ten. Residents point to convenience and the "all in one" aspect of the neighborhood, citing the advantages of having a preschool, elementary school, park and recreational facilities all within walking distance. Harking back to simpler times, kids ride their bikes to the park and to the local coffee shop for hot chocolate on cold days.

From Army Station to Planned Community

Cameron Station is a former Army installation that served as a quartermaster depot along the Southern Railway Tracks near Cameron Run. Among other missions, during the Korean War, Cameron Station served as the War Dog Receiving and Holding Station where dogs underwent training before shipping out. The station closed in September 1995 but kept the name Cameron Station with many of the new street names honoring former military personages. In 1999, developers completed construction of Cameron Station, the planned community.

The neighborhood was designed to reflect the surrounding area's colonial history and features homes with red brick exteriors, cobblestone sidewalks, colonial street lamps, and other touches reminiscent of 18th and 19th century architecture. Some 975 townhouses, 762 condominium apartments and approximately 50 detached homes are interspersed with community green spaces and recreational amenities. In fact, Cameron Station is bordered by three parks, including the Armistead L. Boothe Park at the back of the Samuel Tucker Elementary School, and the Cameron Station Linear Park, offering a walking and biking trail. The largest park is the 59-acre Ben Brenman Park which is sometimes better known as the home of the West End Farmers Market. The Ben Brenman Park features a pond, a number of athletic fields, a picnic pavilion as well as a popular dog park.

At the heart of the community is the recently renovated Cameron Club, which includes a fitness center, basketball court and adult and children's pools. The Center also hosts a number of social and business gatherings for residents, thanks to an active Cameron Station HOA.

With the proposed redevelopment of nearby Landmark Mall on Duke Street, as well as several mixed use projects in the works, the community is faced with a big question.  SHould they build more walkways to attractions outside the community or to continue to enjoy the "gated feel" and relative privacy of their self-contained neighborhood.