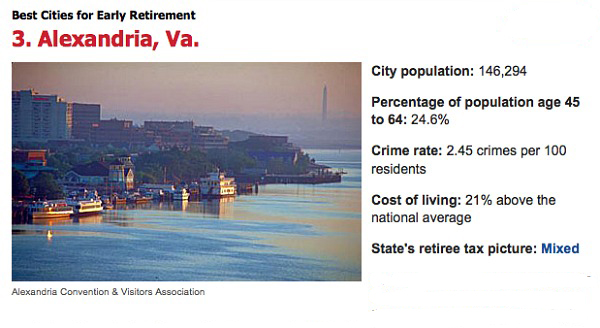 While Florida may be the obvious choice for early retirees at first blush, the Arlington/Alexandria, Virginia, area edged out Florida's major coastal cities as the most desirable locations for seniors. In fact, the only Florida city to make the Top Ten was Cape Coral.

According to a recent Bankrate survey, while both Arlington and Alexandria are expensive, seniors benefit from Virginia's top-ranked health care system as well as the walkability of both areas. Located on the west bank of the Potomac River, Alexandria benefits from two Metro lines that provide easy access to Downtown DC as well as the Potomac River waterfront that provides hours of recreational enjoyment to walkers, cyclists, and joggers. The Old Town historic district is the perfect place for a stroll with its art galleries, specialty stores, and trendy eating and dining spots. Because of its close location to the District, Alexandria/Arlington residents can also enjoy free visits to the Smithsonian museums, monuments and memorials that make up so much of the Greater DC area appeal.

For those seniors who aren't ready to fully retire and are looking for their "next act," the Alexandria area provides one of the lowest unemployment rates of all of the cities ranked in the Bankrate list. With the federal government as the largest employer for the area and an extremely stable one at that, opportunities abound for consulting and part-time work. This demographic plays well to a recent Gallup poll that notes 21% of non-retired Americans today expect part-time work will be a major source of retirement income. While the cost of living in Virginia is certainly higher than many states, Virginia does not tax social security income. Moreover, Americans age 65 and older can deduct up to $12,000 of retirement income.

Virginia is also home to a number of top-ranked hospitals as well as doctors and health care providers, providing an exceptionally healthy community for retirees, young professionals and families alike.

The state of Arizona dominated the Bankrate listings with with Phoenix, Prescott, and Tuscon grabbing the #1, #3, and #4 spots while Arlington/Alexandria came in at #2. Des Moines was the only midwestern state to make the list with seniors praising its affordability and healthcare system. Ranked worst: New York City; Little Rock, Arkansas; and Buffalo, New York.